This Pet Sitter got stuck in the snow!

Last night was honestly one of the scariest I’ve had in my 15+ years of pet sitting! Chicago has been getting pounded by snow since December. People are not keeping up with their driveways & walkways!
I went on a consultation to meet a new client in Barrington, IL last night. Our appointment was at 7pm so it was dark out. I looked at their location on Google before leaving & plugged their address into my GPS. The roads were clear & it hadn’t snowed so I decided to take my Corolla.

As I pulled on to their street I couldn’t see the pavement. It was a snow covered plowed road. These very large homes/estates were off set in a desolate area. I pulled up to a house and my GPS said I had arrived at my destination. I looked at the driveway and the entrance to the driveway wasn’t plowed very well. But I could see the middle of it had been, as I could see pavement. So I decided to give it a shot. I got half way up the driveway and saw they had not finished plowing it! There were 3 large Navigator type SUVs in the driveway ahead up my the 4 car garage. I knew my car wouldn’t make it any further.
I called my new client and asked if I was at the right house because I couldn’t get up the drive. The client informed me that I was not at their house. I now had to try to back down this driveway because I couldn’t turn around! I proceeded to back down the drive and got stuck right at the entrance where it hadn’t been plowed well. My car wouldn’t move – I was stuck! I went to call my client and let them know I was stuck and also planned on called road side assistance – when I looked at my phone and I had NO CELL RECEPTION! I couldn’t make any calls! Now I am stuck in a dark desolate area, with no cell phone reception, and the people who’s driveway I was stuck in let their 2 big dogs out! So I can’t walk up to the house to ask for help because I don’t know the dogs demeanor. 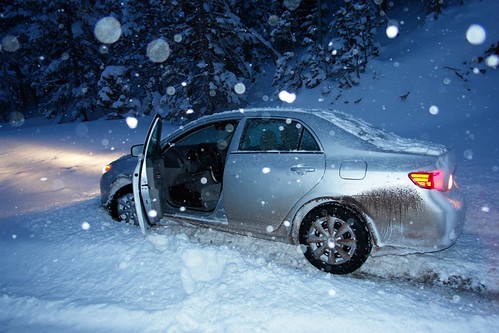 I seriously almost started to cry, I was scared & didn’t know how to get help. I had heard 911 works when you don’t have cell phone reception. I tried it and got the 911 operator! I was sooo glad to hear a voice on the other side of the phone! I explained I was a pet sitter stuck in a driveway and had no cell phone reception. I could give them the address of where I was supposed to be going but that wasn’t were I was actually at. They were able to locate me off my phones GPS, and sent an officer out to me. He checked my rear end to make sure that my tail pipe wasn’t blocked, so while my car ran I didn’t get Carbon Monoxide poisoning. The officer called a tow truck for me and said he’d stay until they arrived. I felt better know ing I was now safe & getting help.
All of a sudden I got a weak cell phone signal and was able to send a text to my client explaining I was stuck in a driveway down the street. They responded they were on their way to help me!
My NEW clients arrived with a shovel and drug out my car & freed me before the tow truck arrived! The officer was able to call and cancel the tow truck and I didn’t have to pay anything! 🙂
I was sooo happy & relieved! I can’t thank my new clients the Ragan’s and the Barrington Police enough!
I will be taking my 4 Wheel drive truck from now on to all consultations until spring just to be safe.

About the Author: Shannon's Pet-Sitting